" A Jewel of a Book":  Review by Writer and Translator, Yaacov David Shulman 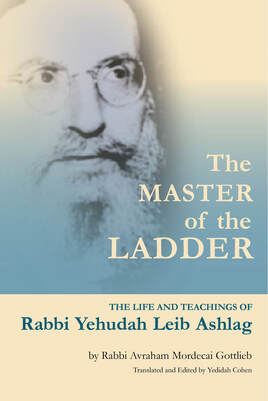 The Master of the Ladder: The Life and Teachings of Rabbi Yehudah Leib Ashlag (by Rabbi Avraham Mordecai Gottlieb, translated and edited by Yedidah Cohen) is a presentation of Rabbi Ashlag’s life and teachings.
The book may be described not so much a full-fledged biography as a series of anecdotes stretched across a chronological framework. These are interspersed with sections in which the author, himself a leading student of the teachings of Rabbi Ashlag, offers his own presentations of Rabbi Ashlag’s thought.
Throughout the book the figure of Rabbi Ashlag appears as an intense and holy man, and the stories have an intensity and purifying quality, verifying the Hasidic teachings that stories of tzaddikim are in themselves a powerful means of transmission of Torah and holiness. ​he book begins with a particularly powerful spiritual testimony: Rabbi Ashlag’s own writing on how he experienced an encounter with his own teacher, the Belzer Rebbe (Rabbi Yissachar Dov Rokeach) in 1919. Interestingly, this document was one of a number of pages that Rabbi Ashlag wished to consign to the flames but which were fortunately saved. In this document, Rabbi Ashlag describes how he was immersed in a state of elevated consciousness that he calls the Light of Wisdom. He comes to the Belzer Rebbe for guidance, and the entire encounter is conducted in an indirect manner of inference and implication. Rabbi Ashlag is in a state of consternation because apparently the Belzer Rebbe wishes him to descend from this state of consciousness in order to operate on the level of a state of consciousness called the Light of Lovingkindness. With misgivings, Rabbi Ashlag accepts this directive, and that new approach marks the direction of the remainder of his life.
This brief autobiographical document—which is presented twice: once in itself and once with a detailed commentary and explanation—is an extraordinary description in which Rabbi Ashlag describes his own powerful emotions, ranging from distress to delight, his relationship with the Belzer Rebbe—his questioning the Belzer Rebbe and his shame at doing so—and his sense that the this-worldly aspect of this encounter was only a part of a broader reality.
Rabbi Ashlag reveals his inner world and his bond with his students in his letters, in which he tells of a master kabbalist whom he learned from and offers his students counsel and guidance. One letter is particularly revealing of his deep concern for his students, and that letter too is presented with a commentary.
He gathered a group of dedicated students around him, and under his direction they formed a spiritual society, learning from him throughout the night with great personal sacrifice—a society similar to others, such as that around the Ramchal and that described by the Piaseszner Rebbe.
In 1921, Rabbi Ashlag told his wife, “I have nothing more to do in this world. I have already rectified that which was laid on me to rectify.” In order to remain alive, he and his family moved from Warsaw to the Land of Israel, where he spent the rest of his life (with a couple of exceptions, such as a few years’ stay in London).
Rabbi Ashlag’s great mission in life was to present the teachings of the Ari in language that would be clear and accessible. Prior to writing his magnum opus, the Sulam, he wrote voluminously directly on the cryptic teachings of the Ari.
However, Rabbi Ashlag’s intent was not to make Kabbalah accessible to one and all, religious and non-religious, but to make it accessible to those who are committed to the path of the Torah. Thus, when a review of his book on the teachings of the Ari was published in a Warsaw newspaper, he was deeply shocked, states Rabbi Gottlieb. “Copies of the manuscript of the Panim Meirot Umasbirot were sent to Poland. Somehow, one fell into the hands of one Hillel Tzeitlin, a Jew, who, originally from a Chasidic background, had renounced his upbringing and become involved in the ideas of western philosophy. Tzeitlin published an article in the Jewish newspaper, Der Moment, praising the innovative work of the holy Sage. But when Rabbi Ashlag learned that his work had fallen into the hand of Tzeitlin he was deeply shocked. Praise from such a man would only arouse opposition to his work in the orthodox circles in Warsaw.” I quote this passage at length because it is puzzling. The author’s disparaging reference to Tzeitlin—“one Hillel Tzeitlin, a Jew”—indicates that he is unaware that Tzeitlin, after renouncing his Chasidic background, returned to the observance of the Torah and to publicizing its spiritual treasures among the non-religious intellectual classes of Warsaw. It is also puzzling that Rabbi Ashlag would have been so upset that Hillel Tzeitlin’s article might lead the “orthodox” to dismiss his work, when he himself encountered so much opposition and denunciation of his innovative work in Jerusalem from the traditional Sephardic kabbalists and from the “old yishuv” Orthodox community. (A second edition of this book would do well to rectify this description of Hillel Tzeitlin and clarify Rabbi Ashlag’s concerns. )
It is clear from the many comments quoted in this book of Rabbi Ashlag’s relatives and students, and from the many narratives, that Rabbi Ashlag was a rare and holy individual who lived on a plane different than the plane on which ordinary mortals live. Reading this book offers the ability to experience something—at least an echo or a reflection—of that holy, the ability to glimpse a reality beyond that of the every day, and the opening of the heart to yearn for that reality.