Translating the work of the Rabbis Ashlag: What is involved? 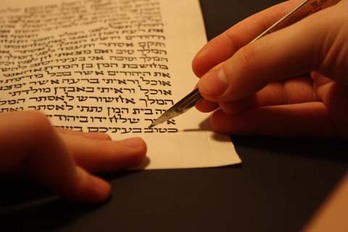 A scribe at work
Translating the work of the Baal HaSulam and that of his son Rabbi Baruch Shalom Halevi Ashlag is both a privilege and a challenge.
It is not a mechanical work, but demands a total involvement of the translator in all the stages of the work; using professional language skills, but also going much beyond, connecting heart with heart, to the core of the material.

For many months now I have had the privilege of studying an article of Rabbi Baruch Shalom Ashlag with my cheruta in which he discusses the correct way to study Torah (Bircat Shalom Sefer HaMa'amarim , Volume three, year 5748, article 12 Mah Hem Torah uMelacha B'dereck Hashem). In this article the Bircat Shalom looks at four modalities within the study of Torah which we practice in order to come to affinity of form with the Creator.

These are:
The first two levels of learning Torah belong to the intellectual aspect of a person and are common for all Israel; the second two aspects belong to the tikkun haLev and belong to the pathway of the individual who yearns to come closer to God in faith.

The first stage
The first work in translating any piece of Rabbi Ashlag's is first of all to try to understand what the Rav is saying. Then comes the "grunt work" of getting the Hebrew into English, of course getting out the spelling mistakes and fixing punctuation

The second stage
Then comes getting it into good English. This might involve splitting up sentences, if they are very long, or sometimes lengthening phrases when the Rav has used a short-hand. Often it involves hunting down a reference or a source when the Rav has referred to some scripture or reference from the Talmud , Midrash or Zohar. Since he doesn't always point out that he is referring to a source you have to develop a good ear for this, and hunt down the sources so you can check what he is referring to. Sometimes he gives just a few words and relies on the familiarity of the reader with the Sources to complete the rest . This was, in fact, standard practice in the period in which he wrote, when one could rely on the reader being totally familiar with all the source texts. This, however, cannot be relied on today. Therefore, one needs, not only to hunt down the source, but often to complete the quotation, or even add a few more verses if its context seems to be important for the reader's understanding. ( Google and Or Hasulam are invaluable here!).

There is a difference between the Baal HaSulam and the Rav Baruch Ashlag; they use language very differently. The Baal HaSulam uses a "high" language and sometimes his meanings are not obvious: A good detailed old- fashioned dictionary is very helpful —the on-line ones are not good enough; also a Biblical lexicon and even an Aramaic or Talmudic dictionary is helpful if you are really stuck. However, once you are sure you have the correct meaning, the Baal HaSulam's precision is helpful.

The problems with translating Rav Baruch aren't the same: As is well known, he disguises the highest concepts in the simplest of language… He is more involved with how we relate to the process he is describing, rather than with the individual words. It is important to translate, not just the simple words, but the process he is describing.  In many ways, the translation of his work is harder, because it is so much more reliant on myself, understanding the inner work. Often it takes many goes until I feel I have got it. Usually this is because it takes me a while until I really feel I'm on his wavelength.

When you've got the translation down, then you work directly with the English, taking care that the words are in the right order— often Hebrew phraseology is different than that usual in English. Don't use difficult words, even if they are the most literally accurate, such that the English reader feels he needs a dictionary to understand what you have written. I don't translate Kabblistic terms, as invariably their literal translation confuses rather than enlightens the reader. It is better to leave them as terms and include their clear definition in brackets. You might find you shorten sentences, alter punctuation, occasionally change the order that elements appear in the sentence in order for it to read well in the English. Then you need to go back again and check that you didn't move too far away from the Hebrew, and if necessary you adjust, where you have done so.

At this stage the normal translator adds up the words and tells you how much it costs.
But I really do feel there are two further stages:

The third stage
Sometime later, maybe a month, I go back to the Hebrew and relearn it. Now my understanding has matured. The struggles of the above two stages and the life I have lived in the meantime, have made a difference to my understanding   At this point, I find a deeper understanding of the article. A truer way of understanding what Rav Ashlag is saying. I re-look at the English and ask, does it convey my new, deeper understanding? Here, you really have to take your time, to work unhurriedly from an inner place of tranquility. Often it needs a further revision. Sometimes more, sometimes less, sometimes, only a word here and punctuation change there, sometimes a rewrite of whole sentences.

The fourth stage
Finally, when learning with my English -speaking chevrutas  I see that  the English, through the grace of God, has captured some of the power and beauty I sense in the Hebrew.. Then I see what a gift this is from the Holy Blessed One.